Fortunately, both the C and B teams missed each other in the semi-finals.  Currie and Balerno 1 played and defeated Marjorie Kidd, while on an adjoining sheet, Katie Wood, Agnes Barr, Betty Gibb and Margaret Nicol (Gina Aitken had played in earlier rounds as well) took on and defeated the strong Barbara Watt rink (which included club members Shona Watt and Margaret Barry).

In the final, C&B1 took an early lead against C&B2 and never looked back.  The picture shows both teams enjoying the presentation at Murrayfield. 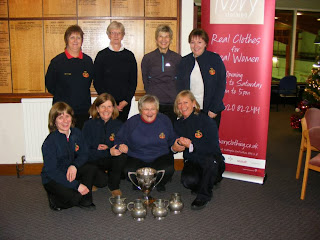 Many congratulations to both teams and the club wishes them well in the national finals.
Posted by Robin Copland at 22:48