There were a fair few Aitkens, Barrs and assorted other Currie and Balerno members on show for the annual Christmas Bonspiel at Murrayfield on Saturday.  Two members were completely sober (your writer and Margaret Nicol) and are therefore able to give a reasoned account of proceedings.  Without wishing to stray from the normally objective standards of journalism for which this website is (justly) famous around the world, suffice it to report that there was some falling-down juice consumed by those of an age, followed by four ends of curling, followed by the consumption of more falling-down juice, followed by some more curling and followed again by the -by this time, loud - consumption of a lot of falling down juice and dinner.

Then everyone went home, following the advice of Milton in Paradise Lost -

Presumably, the drivers were designated.

Anyhoo the noo, Currie and Balerno curlers were conspicuous by their absence on the winner's podium, until, that is, it came to the great turkey shoot-out.  A hack is put in at the top corner of the rink and everyone throws a stone to the diagonally opposite corner.  There were some pretty impressive efforts and the measure was at less than six inches when Mother Aitken came to throw her effort in the general direction.  She covered the pot lid and that was that!

To make matters even more Aitken-dominated (as if Gina winning the Scottish Mixed Doubles Championship was not enough), they went on to win the fancy dress prize as well for their "Grease"-themed costumes and hair pieces.

Merry Christmas everyone and a Guid New Year.  Normal service will resume in January (unless someone wins the Hew Chalmers down in Stranraer!).
Posted by Robin Copland at 12:11 No comments:

The final two games of the first half of the season saw Mike Wood complete a good finish to his competition.  He, Andrew Galloway, Simon Kesley and Morna Aitken enjoyed a great game against Robin Copland, Donald Kennedy, Richie Anderson and substitute Gavin Barr which ended in a 7-5 victory.  Robin's two ends sneaked him above Brian Fleming in the league table by one end.

Meanwhile Jenny Barr, Andrew Barr, Lois Copland and Joe Barry prevailed over Dave Munro, Susan MacFarlane and substitutes Karen Munro and Margaret Jacks.  This was another good game with Jenny having to draw the button against four shots in the seventh and last end!

Jenny leapfrogged Dave in the league table to take third place on her own on eight pointsw.

That concludes the Kettle for another season.  The first games in the Lymphoy Cup competition take place on Friday 4 January.  The teams and draw are already on the website.  Look along the top of the page for the appropriate drop down.

Posted by Robin Copland at 21:31 No comments: 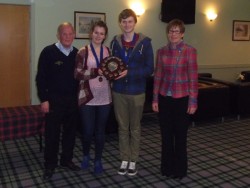 Gina Aitken and Bruce Mouat
Many congratulations to associate member, Gina and Bruce who won the Scottish Mxed Doubles Championship last weekend in Perth.
They came through an emotionally-draining game against dad David and sister Tasha in the quarter-finals before facing Alan and Nancy (nee Murdoch) Smith in the semis.  Their game swung one way, then the other before they managed to secure victory with a stolen 1 in the eighth end.
Their final game against Graham Shedden and Claire Sloan was slightly easier - they were 9-2 ahead after five ends, though the loss of a 3 in the sixth, then a 1 in the seventh might have caused the hearts to beat a little faster than necessary!
They will represent Scotland in the World Mixed Doubles Championships in Canada at the end of the season.
Many congratulations to Gina from all members of the club and to David and Tasha for qualifying for the quarter-finals.  Congratulations also to Kerry Barr who, along with John Hamilton reached the semi-finals before bowing out to Graham Shedden.

Ian and his team are still very much in the running for the order of merit title after their performance last weekend in the Kinross Open Championship where they reached the semi-finals before losing out to Duncan Gracie and his team.
There is one more championship to go before the winners will be identified.  The winners will receive their prizes at the champions dinner during the Cooperative Funeralcare Scottish Championship in Perth later on this season.
﻿
Posted by Robin Copland at 13:11 No comments:

Kettle Trophy Round Seven (Part One)


Niall and company kept up the good work with an outstanding final round win over Susan Kesley.  They were aware that John Steven was on their heels and that a win was needed - and that is just what they delivered.  They were 8-o up after only five ends and when Susan scored her 1 in end six, thus avoiding the dreaded "granny", hands were offered, brushes went up and team Gunn could celebrate their victory.

Their only loss was a really tight affair and the boilerhouse was missing - neither Shona, nor Andrew were available to play that night.  Even when Niall and Shona were away on other duty, Andrew Cargill stepped up to the plate and skipped the team to victory.

Well deserved - many congratulations from the rest of the club.


John Steven takes the Harlaw Cup with a Dominant Display

Meanwhile, on the next sheet, John Steven was keeping the pressure up, hoping for a slip-up from Niall.  It wasn't to be, but his victory over Brian Fleming secured the Harlaw Cup for him, Katie Wood, Nook Weir and Agnes Barr.

John reports from the scene of the action, "we won the toss, but chose the blue stones rather than the yellow on sheet three.  We lost a two in the first end before our team bounced back and came into its own - Agnes putting up the guards, Nook drawing the four foot and Katie hitting out any threats.  I just managed to play the shots I needed to win the next four ends to take a 7-2 lead.  Brian scored a point in the sixth end, then shook hands".

The final round takes place next week and minor places as well as bragging rights are still up for grabs.