Notices have been sent out for the AGM.  It will held at the Currie Rugby Club in Balerno on Tuesday 30th April at 7.30 pm.  To find the meeting room, enter by the main door and turn immediately left.  Go through the door at the end of the corridor, then left through another door and up the stairs.

Members wishing to attend the meeting are requested to arrive early in order that the meeting can start promptly.

Please note that any non-members who have won prizes should plan to attend at approximately 8.30 pm for the prize-giving.

Please let Jenny know of any members curling achievements before the meeting for inclusion in her club report.
Posted by Robin Copland at 12:24 No comments:

If it's good enough for Team Brewster...


It's good enough for Currie and Balerno's ladies, five of whom travelled to Stranraer recently to compete for the Henderson Bishop trophy.  Regular blog followers will recall that Susan Kesley, Jenny Barr, Fran Stretton, Morna Aitken and Margaret Nicol won the Murrayfield playdown to represent Murrayfield at the national finals of the competition.

The draw was not kind to them, as they faced the might of Stranraer and recent Scottish champion, Gail Munro on her own ice in the very first round.  Sadly, they lost that first game, but then went on a fantastic undefeated run all the way to the final of the low road for the Cherrystone Cup - a game that they went on to win.

We had a fab time, only losing one game all week.  The Stranraer ice was tricky, as expected and some of the stones are challenging, to say the least.  The food and drink were both up to the usual North West standards and the chat on and off the ice was entertaining - again as could be expected from the five C and B curlers involved.

Ladies Branch President Jenny Bain, celebrated her 50th birthday on the final day and was given a surprise party on the Wednesday night after the formal dinner and entertainment had been completed by the Stranraer curlers.  President Jenny was quite at a loss for words when she realised that she had been "tricked", though she definitely seemed to enjoy the party in her honour as it moved through the hotel and through the night.

We were disappointed not to make the high road but after losing our first game to Gail Munro from Stranraer, the best we could do was win the lovely Cherrrystone Trophy.  It was a real team effort and we all had our part to play
All in all, it seems to have been a great week and well done to the ladies for bringing back the Cherrystone Cup! 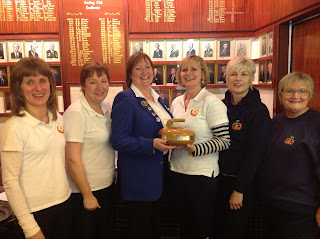 This year's Tom Holmes was another happy club occasion, fully in the traditions of competition.  Raymond Preston writes

There were a number of reserves being utilised for this more social than competitive annual gathering of the Tom Holmes Trophy.  This meant a few last minute changes to the advertised skips.
The victims or skips this year were Simon Kesley, Morna Aitken, Francis Kennedy ,Andrew Barr, Anne Anderson, Norman Nicol, Pauline Alexander and her hubby Richard Alexander (standing in for Margaret Nicol).

The proceedings did not get off to the best of starts - we only got onto the ice a good 15minutes later than expected.

Once things got going however, the curling was pretty good and after round 1 the leading teams were Norman, Francis and Andrew Barr.

Assisting with the scoring was Karen Munro who had been asked to sub but couldn’t remember for whom and as there were no spaces on the ice she helpfully went along filling in score cards in between scoffing my sweets.

Round 2 progressed, but as the scoring sheets disappeared at the end of the competition I’ve little recall of what happened other than at the end of Round  2 Norman was in the lead on 6 ends followed by Francis on 5 and Andrew B on 4.  Trailing behind was Pauline on 1 and Simon on nil.

Starting late was always going to be an issue so it was decided to make the last round 2 ends only.

This effectively made it a 3 horse race and with Andrew losing his first end it came down to Francis and Norman.  Francis took the first end to set up a final end showdown and with one stone behind some guards was looking good for a steal until his last stone- an attempted guard to block the house drifted a bit too far in to the house, wide and just short of the T.
All Norman had to do was tap it back and roll in and he didn’t disappoint his team with an excellent shot, one of many he played throughout his victorious afternoon.  A thoroughly deserved win and I am sure everyone will have been glad to see Norman back on the ice again.

There was apparently something to do with Young Farmers(must be a new boy band) along the road so not sure why so many members had to disappear, young persons only gained entry with a wrinkly in tow was the rumour.

With so many members off to change in to their glad rags it was felt that it would be more appropriate if the presentation of the trophy be left till the AGM.

A group of 24 sat down for their tea and a pleasant time was had by all who attended.


Thanks to Raymond for his comprehensive report.
Posted by Robin Copland at 09:11 No comments:

A tight game between Katie and John Steven resulted in a win for Katie.  A stolen 2 in the fourth end gave Katie and co a three shot lead.  John is not one for giving up and he scored a stolen 1 of his own in the penultimate sixth end to make things interesting coming down the last.  Some unnecessary shouting from an adjoining sheet caused confusion in the ranks of the Wood team but they won through in the end and secured the runners-up spot and the Glenbrook Quaich.

Meanwhile, on sheet seven (or is that one?), Andrew Barr, Niall Gunn, Raymond Preston and Morna Aitken started off with a bang and were three up on Andrew Galloway, Robin Copland and the injured Joe Barry.  They were still in with the merest of shouts - the first thing that needed to happen was that they won handsomely; the second was that Katie and John had to draw their game - preferably with a score of nil-all; oh - and Brian had to lose or draw his game; oh and it would have been helpful if Bob had lost or drawn his game as well.  None of which happened, so that was that!  Good game though with Andrew playing a nice barrier weight take out in the wings against three Barr counters.  By this time, the Galloway team had been bolstered with the substitution of the knackered Joe Barry with the fit Margaret Nicol and Susan MacFarlane had made it down from Dundee in one piece.  Long story - don't go there.

Jenny Barr, Betty Gibb, Margaret Nicol (but see above) and Donald Kennedy have not had the best of Lymphoy Cups, to be fair.  Tonight wasn't much better and included a seven for Bob Barr, Andrew Cargill, Barbara Wood and Pauline Alexander.  To be even fairer, Bob thought he was playing his last double for an eight.  See Bob.  See maths.  All I'm saying.

Brian, Nook, Simon and substitute Gavin Barr were in with the same kind of shout as Andrew Barr (see above).  Trouble was that they were up against the wifely  and recently fast-charging Susan K.  Brian and co did their bit and administered a bit of a doing - 7-2 was the final score.  Quiet drive back to Fenton Barns, I would venture.  Churchyard quiet - which, knowing the Kesleys as I do, would not be the norm.

Andrew, Robin, Joe, Susan and various substitutes - especially Margaret Jacks and Gavin Barr, went through the competition undefeated.  Some tight games - including tonight's, and some luck along the way.  That's what it takes though.

With a round to spare, Andrew Galloway, Robin Copland, Susan Macfarlane and Joe Barry have secured the Lymphoy Cup and remain undefeated after tonight's game against the Woodless Wood team.  It was a Coplandless game as well - well almost.  Ian subbed for Lois on Katie's team, skipped by Francis Kennedy.  According to reports, this was a tight affair with 3s being swapped with abandon.  Andrew was three up coming home and must have been nervous playing his last couple of stones.  He played a clinker of a tap back with hist last stone, to make life difficult for Francis - who had three  or around the four-foot.  That saved a big end - and maybe even the game.

Bob Barr meanwhile competed in a tight game with Shona Watt, skipping in Susan Kesley's absence.  A big five in the fifth end secured the win for Bob and moves him to four points in the league table.

The race for second will keep people honest next week.  Katie is in the driving seat, but plays John Steven - who is also in the running.  All the rest will be willing a Steven win to open things up.  John's nearest challenger is Brian - two ends behind him.  With the best will in the world, seven ends is too many for either Susan or Andrew Barr to make up.  Katie, John, or Brian - who will be stepping up to the plate?