Great news for the club as C&B won the Province Bonspiel yesterday - for the first time in 22 years!


Team 1 was Brian Fleming, Andrew Barr, Jenny Barr and Morna Aitken; they played against Gogar Park at 12.00 noon, had a lovely game which was won by 15-1 (the 1 was scored at the final end...).  This was a great start to the day and set the club up well for the overall competition.  It transpired that, had C&B not won the overall competition (any club is only allowed to win one trophy each year) this result would have  qualified the club for the Colin Black Salver for the highest-up single score in the competition.


Team 2 was skipped by Andrew Galloway, with Dave Munro, Andrew Cargill and Joe Barry (standing in as a last minute sub as Betty Gibb called off ill on Sunday). They played Heriots FP at 1600 and won with plus 4 shots.


Team 3 was John Steven, Katie Wood, Bob Barr and Shona Watt.  By this time, they knew what they had to do when they stepped on the ice at 2000.  Eventually, it came down to a countback against reigning champions, Midcalder CC; C&B won by 1 end!

Many thanks to committee member Andrew Cargill, who had the unenviable task of organising the three teams, a task someone likened to herding cats.  Bit unfair to cats, I thought, but there we are!
Congratulations to all the club members who took part.  A great result! 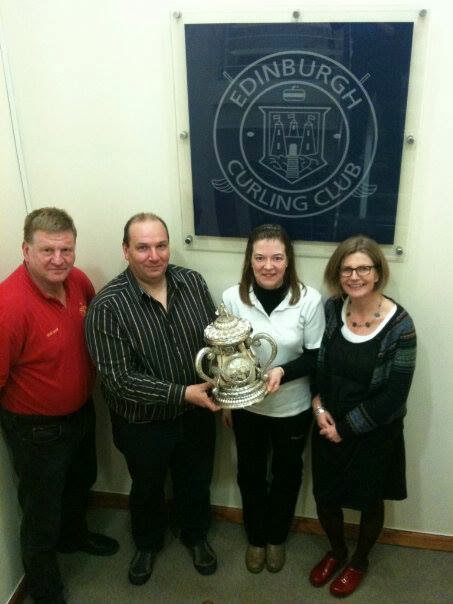 Posted by Robin Copland at 23:04 No comments:

Round Two (second) - Draws all Round!

An interesting couple of games with two teams taking early leads - only to be pegged back by dogged play from their opponents!  Here are the results.
Robin and team started off in stellar fashion, fashioning a two in the first end and facing Andrew with four in the second end (Andrew did well to cut it back to one shot).  The Galloway team fought their way back into the game and indeed, coming down the seventh (and last) end were leading coming home having forced Robin to draw to count out two shots in the sixth.

Robin, in turn had a tricky shot to win the game.  It hung straight on a most annoying and pronounced straight bit and he missed.  The draw was the fair result though (he said through gritted teeth!) and the points were split.

In the other game, John was all over Brian for the first few ends and led 5-1 after five; Brian clawed his way back and secured a draw in the last end having scored two, then stolen two singles.

At the end of the game, Brian was happier with his point than John!

The league table remains wide open with only Katie Wood on a maximum four points and two other undefeated teams (Andrew and Robin) on three points each.

That's odd!  On the original spreadsheet, the "Position", "Team" and "Played" headers are correctly coloured!  That's not just odd - really quite annoying a well!

Anyhow - no matter.  I predict that this one is going to the wire!

Round Two (First) - Battle of the Barrs


In the first part of round two on Friday night past, Jenny Barr found herself paying against her brother-in-law Andrew.  I, of course, tipped Andrew at the start of the competition which, so far, has been the kiss of death on his chances.  His three ends from seven played may count for something towards the end of the competition.  Jenny moves to top place on her own for the time being.

In the other game, Katie got off the mark with an impressive win over Susan which results in as tight a league as we have had for a while!


Early days though, as John Steven will confirm!  At this stage in the Kettle, he was roughly where he is now and went on to claim second place!

Posted by Robin Copland at 12:26 No comments: