Susan Kesley is Sole Nominee for Vice-President of the Royal Caledonian Curling Club!

It has been a busy couple of weeks for C&B Club President, Susan Kesley, pictured here winning the Rhona Martin Sportsmanship Award after her recent participation in the Scottish Ladies Curling Championship.


She and the rest of team Kesley then went on to win creditable Silver Medals and Scottish Ladies Senior Curling Championship last week.

Now, it has just been announced on the Royal Club website that Susan's is the only name put forward for the post of Vice-President.  All being well, this means that in a year or so, Susan will become the first ever lady President of the Royal Club.

The Royal Club was originally founded as the Grand Caledonian Curling Club in 1838, so this is indeed an historic moment, both for the RCCC, for Susan and, dare I say it, for Currie and Balerno Curling Club.

Many congratulations to Susan.

Posted by Robin Copland at 15:34 No comments:

Sadly, it was not to be at the weekend for team Kesley, but they can be mighty proud, not only of their achievements in this year's championship in Hamilton where they won Silver but also of their run the three Scottish Senior Ladies Championships.  Three medals, two Golds and a Silver speak of high achievement against the best age-group curlers in Scotland.

Team member Vicky Gumley posted this picture on her Facebook page and I hope that she does not mind that I have nicked it for the C&B website!  Says it all.  Many congratulations to the team. 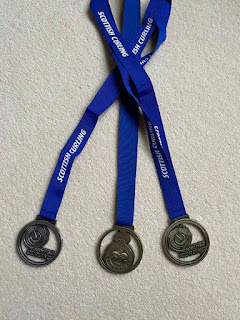 The final this year was a cracking and close game which I watched courtesy of a mobile phone perched in the bar overlooking the rink.  With three stones to come, Susan was sitting well behind a cluster of guards and looking good for the steal that would take the game into extra time.  Jackie played a cracker, wicking in from her own stone to knock the Kesley stone to the side.  Crucially, team Lockhart now lay shot.  Susan's last so nearly came off.  She attempted to drive her own short stone into the pack at the back of the four foot and lie shot.  Sadly for her, the stone didn't quite work out the way that was intended and Jackie was left lying three before playing her last shot.  So near yet so far!  Team Lockhart knew that they had been in a game!

Congratulations also to Shona Watt who, in her first appearance at the Scottish Senior Championship, reached the quarter-finals playing at second in Liz Paul's Braehead team.
Posted by Robin Copland at 15:23 No comments:

There were two games this Friday with Andrew Galloway taking on Dave Munro's team, skipped by Betty Gibb in his absence and Jenny Barr playing against Shona Watt.  Shona is currently competing in the Scottish Senior Championships, so Maggie Barry stepped up to the plate and skipped the team.

Andrew, Robin Copland, Gavin Barr and Donald Kennedy all played well and the rubs all went their way.  They ended up winning 16-2 - a score which perhaps flattered them just a bit!  They won five ends as well.

Meanwhile, on the next sheet, Jenny Barr looked to be in complete control in her game against Maggie Barry, but a things became a lot closer when Maggie scored five in the sixth end.  The Barry team then stole in the seventh end, but only scored one, so Jenny, Rowena Steven, Raymond Preston and Susan MacFarlane scraped over the line 7-6.

I say that because Andrew plays both Niall Gunn and John Steven in his last two games.  If he wins both of them, then he would move to 11 points and crucially, the most that John could get to in that circumstance would be 10 points.  Niall, on the other hand could lose to Andrew, but still win the Lymphoy.

Niall plays Andrew, Brian Fleming and Jenny Barr.  If he and his team win all their games, then they obviously win the league, but none of their remaining matches are what you might call shoe-ins.  They are in pole position though.

If John wins all his remaining games (against Susan Kesley, Jenny Barr and Andrew Galloway) then he would move to 12 points - still in with a "shout" of either the Lymphoy or indeed the Glenbrook Quaich, awarded to the runners-up in the competition.  Crucially, he would have beaten his nearest rival, Andrew Galloway.

There are three teams on four points and both Susan and Brian have a crucial game in hand over Dave Munro.  They could reach ten points, so could still finish in the top half of the table and maybe even (with a following wind!) with a trophy to enjoy cleaning!

All will be clearer when the fifth and sixth rounds are completed.
Posted by Robin Copland at 22:43 No comments:

A major event in Midlothian Province is its annual bonspiel.  Clubs enter two or three rinks - the results are pro-rata'd - and the draw is literally that - a draw.  Whom you end up playing against is literally in the hands of the draw master!

C&B's recent record in the competition is exceptional; the club has won the competition no less than three times in the last six years and this year, we were going for a hat-trick - three-in-a-row.

Although Brian Fleming, Mike Wood, Jenny Barr and Betty Gibb lost the morning game by the odd shot (despite Mike's loud attempts to get his front end to sweep harder!), Andrew Galloway, Dave Munro, Joe Barry and Lois Copland had a heady 13-shots win over Corstorphine CC.  Niall and John Steven, together with Katie Wood and Raymond Preston knew that they had to win by eight shots to have a chance of securing another C&B overall win in the overall competition.  They ended up winning by three shots, though they were lying seven shots up before their opposition skip played his last stone.  If he had not played his stone, the club would have ended up third overall in the competition.

Still and all - another great performance and Andrew, Dave, Joe and Lois had the consolation of winning the Colin Black Plate as the highest individual shots-up team.  Sadly, by the time the presentation came to be made, fairly late in the evening, Andrew Galloway was the last person standing for the obligatory team photograph - it was so late that he couldn't keep his eyes open!

Your remote reporter here!  Many thanks to Kerry for sending me the cards.  What can I say?  Eagle-eyed amongst you may have noticed that I had Brian beating John Steven in my first report and, to be fair to me, that was because that was what was on the card.  Both Andrew Barr and John Steven immediately spotted the error and wrote to me.  Here are the corrected scores grid and league table.  To be clear, John won the game so moves to six points, two behind Niall.

The Niall Gunn machine keeps on rolling along.  Undefeated after four games and a two point lead over nearest rival John Steven.  John had a good win against Brian Fleming to keep him in the running.
Here's the results grid

Posted by Robin Copland at 16:04 No comments:

Huge congratulations to Jennifer and former club member Eilidh who, along with team mates Rebecca Morrison and Maggie Wilson won Silver Medals at the Scottish Championships as part of team Wilson.  They have had a great season, also winning silver at the Perth Masters and Braehead Ladies Championships.

Through the week, team Wilson was the form team and they only lost one game in the last round against Eve Muirhead; they had already qualified by that time for the play-off stages of the competition.

In the semi-final, they saw off team Farmer, but just came up short against the pre-competition favourites, team Muirhead.

Here is the team with their medals, pictured just after the final.  I don't know the photographer's name to give credit.

Reigning Scottish Senior Champions, Team Kesley entered the Scottish Championships for a bit of a run-out before their own national championships.  It's a tough school playing against these youngsters, but the team made lots of friends as they rolled back the years and club president Susan won the Rhona Martin Sportsmanship Award.  Here she is with the trophy - again apologies, I cannot give credit to the photographer.

Posted by Robin Copland at 01:22 No comments:

Current member Jennifer Marshall has made it all the way through to the final after an impressive run in the Championships.  Jennifer plays second stones in team Wilson.  Playing lead stones in the team is none other than Eilidh Yeats, whom many will remember from her time in Edinburgh and as a member of the club.

Many congratulations to both and here's to today's final, when team Wilson play team Muirhead.
Posted by Robin Copland at 01:45 No comments:

C&B at the Scottish Championships This Week!

Thanks to Andrew Barr, who has alerted me to some exciting news for all C&B members.  There's a fair few of us at the Scottish this week!  Here's Andrew's email to me

The Scottish Curling Championships begin on Monday at the Dewars Centre in Perth and Currie and Balerno CC is very well represented at this year's event.

Good luck to all and play well!

Penny for David Aitken's thoughts when team Jackson (whom he is coaching in the Scottish) meet up with team Kesley (whom he coached in last season's Scottish and World Senior Championships).  Could be an interesting car journey home to Longniddry is all I'm saying on the matter!
Posted by Robin Copland at 12:02 No comments:

Two games this weekend, Jenny taking on Dave and Andrew (skipped by Robin in his absence) playing Shona.

Dave and Jenny fought out a really tight game with the scores tied coming home - Jenny with the hammer.  There seemed to be a lot of junk out front when Jenny came to throw her last stone, a draw.  It ended up agonisingly short and Dave stole a one and, of course, the game.

Shona raced into a three-shot lead after two ends, but a four followed by a steal of one settled the Copland nerves and meant that Robin, Gavin, Donald and substitute Lois had a two shot lead going into the fifth end which Shona managed to cut to one shot in the fifth; the game was tight.  It all went kind of pear-shaped thereafter for Shona and her team who gave up a six in end six and then a stolen three in the last - thanks in part to a double, then a raised double from Gavin!

Here is the score grid

Six teams still in with a shout, though the position will become clearer once the other half's games have been played.
Posted by Robin Copland at 22:12 No comments: