That was the week that was....

All change at the top!

What a week that was!  Katie, whose progress had hitherto been serene - regal, even - found that John Steven was in no mood for jokes, royal or otherwise.  9-4 the score in this one.

The other front-runner had been Andrew Galloway; he found himself up against an international front-end, including the skip of the current Scottish Ladies Junior Champion team.  For a man who has done a lot of cropping in his time, he came a cropper (don't you just love it?) this time and was on the wrong end of a proper thrashing from Mrs Barr (ooh err, Mrs!).  Fortunately, he got his ends away, scoring three.

Robin and Andrew B had a toothy tussle that swung one way (at one point, Andrew was 9-2 ahead), then back the other; the game ended in a 9-9 draw.

In the clash at the rear end of the table, Brian came out on top - again in a bit of a one-sided game, 9-3.

Three thrashings and a draw.  Bring on Mr Freud.


All of which leaves the table looking something like this with two rounds of curling to go.


Pick your winner from any of the top four teams.  Robin, if he wins both his games can get to eight points.  He plays Susan Kesley and Jane Barr, but there are too many people between him and top place for him to have a realistic shout at anything other than second place.  Apart from anything else, Jenny and John play each other in one of the remaining games; if Jenny wins or draws, she moves out of his range.  If Jenny lost to Robin, but beat John, then she would be on 10 points and, if Robin beat Susan as well, he would be on eight.  John's other game is against Susan, so let's say that Susan won that game (he has already lost to Jenny in this scenario), then Robin could overtake him.

What about Andrew G?  He's got Katie and Andrew B.  Right - let's say that Andrew B beats Andrew G and then he draws with Katie.  Andrew G moves to 8 points and Robin can get in amongst him on ends in that scenario.

Katie has Brian Fleming and Andrew G to play.  Let's say she loses to Brian and draws with Andrew.  Even if she beats Andrew G, in that scenario, she moves to 8 points and Andrew (if, as postulated, he loses to Andrew B) stays on 7.

OK - here's the deal.  One of four teams can win and one of five can end up as runner-up. Which is another way of saying that, if you are in the Andrew B, Susan K or Brian F teams, you are officially goosed.
Posted by Robin Copland at 13:41 No comments:

To win a national championship needs hours of dedication and practice as well as talent and aptitude.  The demands of curling at this level are far higher than the rest of us are capable of - especially when you are skipping the team and playing last stones.  When you add to the mix a crowd of 300 or so in the hall, with all the effects that can have on the playing surface, TV lights blaring in our face, TV cameras with little red lights staring at you as you slide out, stone in hand - when you add all of that to the mix, then you know what the word "pressure" means.

Kerry skipped her team with aplomb.  In the official statistics that Bob Kelly and I were given end-after-end, she consistently threw two perfect stones.  She ended the game on 96% - an astonishing performance - truly world-class, and the best score of the day in either final by quite a significant margin.  To put this into perspective, she threw eighteen stones; two of them or were ever-so-slightly less than perfect - only 80%, instead of 100%.

You always feel sorry for the losers - so near, yet so far.  Hannah Fleming (an occasional sub in C&B games as I know to my cost!) looked out of sorts and Kerry looked the part.  She called the game calmly and was in complete charge.  Team Barr never looked back when the hammer switched hands in the second end; Hannah overthrew an out-turn take out in an attempt to blank and keep the hammer.  From then on it was score twos and force ones.  There was one wee hiccup in the sixth end when team Barr gave up a two, but other than that - well it was one way traffic.

Brilliant performance by all four girls and Kerry brings much credit to C&B! 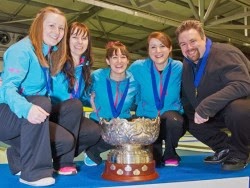 Posted by Robin Copland at 21:38 No comments:

Kerry Barr Bosses her Way to the Scottish Ladies Title!

Kerry Barr came out to play on Sunday morning and she had her game face on!  From the very first stone, she was flawless and gave Hannah Fleming's fancied team absolutely no chances at all.

The official statistics had Kerry at 96% for the final - a world-class performance for a skip at this or any other level, if I am honest.

I was absolutely thrilled to be a commentator in the game (to be fair, you might want to watch with the sound muted on Tuesday night!), but it was a real privilege to be involved in just a wee way in a real highlight in the club's history.

Many congratulations to Kerry, who goes on to skip the Scotland ladies team in the World Championships in St John, New Brunswick.
Posted by Robin Copland at 14:51 No comments:

Galloway Waltzes to the Top of the Table

This was a solid performance from Andrew, Niall, Betty and Agnes Barr.  Brian Fleming was a potential banana skin, but the four of them skipped over it and waltzed home with five ends and five shots to the good.

Meanwhile, John and Robin desperately tried to throw the game at each other, whether by missed shots or greedy tactics.  Anyhow, Robin tried the hardest and, with the scores tied at 7-7 playing the eighth end, he had a draw to the four foot for the game.  He was short and John secured a hard-fought and important win that keeps him Catriona, Susan and Francis well in the hunt.  He is relying on Andrew dropping points though - and that doesn't look likely the way things are going!

Here's the league table after four rounds (of seven).