Many congratulations to C&B President Niall Gunn, John Steven and Joe and Maggie Barry who have won the prestigious "Champion of Champions" Jackson Trophy.  Great achievement for them and for the club. 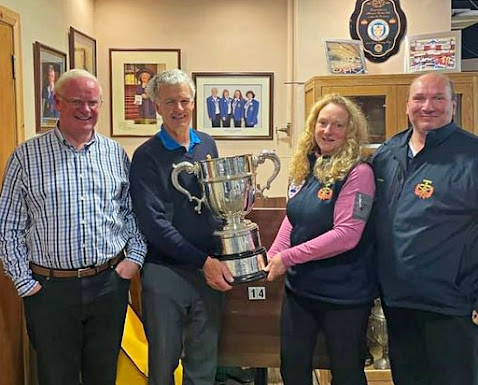 Posted by Robin Copland at 23:10 No comments:

Well, round two has been and went, as football commentators are wont to remark, and already there are patterns developing; good news for some but less so for others - including your scribe's team, which has been at the wrong end of two defeats!

It was a tight game in the first three ends between Karen Munro and club president Niall Gunn and his strong team of Joe Barry (3rd), Morna Aitken and Susan MacFarlane, but they pulled ahead with a big steal of 3 in the fourth end.  Karen was presented with big shots every time that she came to play and was inches away on a couple of occasions from a spectacular result.

On the next sheet, Shona Watt, Fran Stretton, Mike Wood and Jill Gillard were 6-2 up on Rowena Steven, who was skipping Andrew's team in his absence.  A spirited fightback towards the end of the game saw her win three important ends.

John Steven, Jennifer Marshall, Morag Wellman and Richie Anderson have made a great early statement of intent in October's games.  Poor Dave Munro was on the receiving end of a bit of a doing, eventually losing out 11-2.

The last game of the evening was that between Raymond Preston, skipping the team in the absence of Brian, and secretary Jenny Barr.  A tight game this one; Raymond got off to a good start, winning the first three ends, before he and Jenny swapped the next two.  A 2 at the last end resulted in a final score of 4-3 for Raymond.

Posted by Robin Copland at 22:53 No comments:

Well, we are back curling! All eight teams were out for the first round of the Kettle Trophy 2021. John Steven took a six in the first end of his game when Karen Munro's stone overcurled and skinnied her shot right out of the house. Tough to take and the rest of their game was close! There was even a blank end thrown in for good measure with John eventually winning 8-2. Andrew Galloway and Brian Fleming had a really tight game with Andrew in the ascendancy all the way to the last end when Brian scored a three to sneak the game 6-5. He and his team go to the top of the table. The tightest result of the night was the draw between President Niall Gunn and Treasurer David Munro. Niall was 6-2 ahead going into end six of seven, but a big 3 followed by a stolen 1 secured the draw for team D Munro. Finally, in the Shona Watt v Jenny Barr game, Jenny was 7-4 ahead going into the seventh end, but managed to lose the second four of the night! I was driving home with her (thanks for the lift, Jenny!) and - well, let's just say she could have been happier! Looks like I will have to print off the league table and results, photograph them and then post the photos as Blogspot has removed the facility where I could just copy an Excel spreadsheet into the articles. Thanks Blogspot. Thanks for absolutely nothing!

Posted by Robin Copland at 23:28 No comments:

New Season Is Upon Us!

Well now! Hopefully we will all play a few more games in season 2021-22 than we did in 2020-21! Covid is still out there of course, so it behoves us all still to be careful, but the vaccine seems to be doing its job in making everything safer so that now we can mix and match and even curl to our hearts' content!
The committee has been been beavering away and you should already have details of your various teams, reserve lists, contact phone numbers and the like. President Niall has sent round his missive; diaries should by now be updated and all that remains for us to do is to pitch up for our first games! 20.15 on Friday 1 October will see everyone out on the ice. Team John Steven plays team Karen Munro; team Dave Munro plays team Niall Gunn; team Andrew Galloway plays team Brian Fleming and finally, team Shona Watt plays team Jenny Barr. Promises to be a great night's curling with old rivalries and friendships being renewed and new stories to be enacted and then told.
There has been one very small change to the original card - did you all get it? The games originally scheduled for 18.00 on Friday 19th November will now take place at 17.30. Teams Dave Munro, Niall Gunn, Shona Watt and Jenny Barr are the only teams affected. What does this mean? Well, if you are a member of one of those four teams, check your diary and make sure that you have changed the time. If you are NOT a member of those teams, you need do nothing, zero, the square root of diddly squat.
Roll on Friday 1st October which, according to my calendar, is today!
Posted by Robin Copland at 16:12 No comments:

First of all, apologies. The blog site has made a lot of changes, all of which seem to be designed to make life more difficult than it used to be. We may have to look at things for this season and I suspect that young people will need to get involved in setting things up properly. If I may go on a wee rant for a moment,, the new system doesn't seem to want me to change font size, import formatting, or do anything. A complete and utter joke! (New Paragraph) Anyhow, onto the report Well, it didn't look that exciting as the John Steven v Robin Copland (skipping in Andrew Galloway's absence) moved through ends 3-6. A big score of five in the third end looked to have sealed the deal. Robin continued to miss chances to build on the good play from Kirsty and Gavin Barr, and though the Copland team scored a three in the sixth end (an outside chance of a five was again given up on!). Suddenly though, it was John's last stone; he was facing five and had a relatively difficult hit though a port to score a win and secure the win. Cometh the hour, cometh the man! (Headline) John Steven, Lois Copland, Margaret Nicol and Stuart Ronald Win the Lymphoy Cup! John played a great shot under pressure and watched by the interested Niall Gunn team on the next sheet, who had won their game against Jenny Barr. (Sub-heading) Niall Gunn, Kerry Barr, Joe Barry and Norman Nicol win the Glenbrook Quaich It(New Paragraph) has been a really tight competition. It came down to ends, but if John had not made his last stone, Niall and co would have ended up winning the competition. Brian Fleming, currently on eight points after six games could have joined John and Niall on ten points had they both lost their games tonight. As it is, Brian, Andrew Barr, Anne Anderson and David Hogg are guaranteed third place in the league and the longest season in the club's history has finally come to a close! Here is the game grid

And the final league table

Posted by Robin Copland at 22:30 No comments:

The Tom Holmes day proved in the event to be the last club meeting of season  2019-2020.  Fortunately, it lived up to its billing as one of the club highlights, as Dave Munro reports below.

Just two teams emerged from the 1st round of the competition with two-end victories, the teams skipped by Maggie Barry and Morna Aitken, the former after delivering a six-shot pasting to husband Joe, a scoring differential that would later prove critical!

The second round of games found these two teams still out in front but the vagaries of the Schenkel system meant that they played the third- and fourth-placed teams in the final round.  Going down the final end, Maggie had lost one end and Morna had won the first end of her game.  As ends counted first, Morna had to hang on and win her second end; if she managed that, then she would take the silverware home.  Step forward Gavin Barr!  With his last stone to come, Morna was sitting nicely hidden in the four foot, but this was as nought to Gavin!  He played a raised take out, and left himself lying shot.

Meanwhile Maggie, with her team of club president Susan, Donald and Colin managed to win their last end.  This brought them up level on ends won with Morna but, courtesy of their big shots-up win over Joe in the first round, they moved ahead and were declared winners of the trophy.

Many congratulations to everyone who took part and especially to Maggie and company on a great win.

Wish I had been there!
Posted by Robin Copland at 09:41 No comments:

… And Then There Were Three

Round 6 was played over two weekends.  Here is the results grid and there were some big results at the top end of the league!


For Andrew Galloway's team to get in amongst the silverware, they needed to win their last two games.  A 13-3 thumping at the hands of Niall Gunn's team did for Andrew's chances, but kept Niall right in the hunt!

Unless, that is, Brian Fleming also wins his last game and they both lose theirs ...


You can see from the table that Brian is on eight points - two behind John and Niall.  To overtake John might be a tall order as he is seven ends ahead, but Niall is catchable as there are only two ends separating them.
Posted by Robin Copland at 21:05 No comments: