Fortunately, Gina Aitken and Kerry Barr were both playing; they are young and fit, so were able to pitch in and play for absent friends.  Four sessions of pairs - blooming heck!  Donald Kennedy and Joe Barry are not so young (but doubtless still fit) and the pair of them played three sessions - good on them.

Truth was that Gina and Betty Gibb (and what a club season Betty is having so far!) managed two ends against Robin and Nook but, crucially as it turned out, scored the game 4-2 against their rivals.  They followed that up with a four-end win against Jenny Barr and Donald Kennedy, taking them to six ends in total.

Kerry and Francis Kennedy also scored six ends, but were shots down compared to Gina and Betty.  Just for the record, Kerry and Raymond Preston managed five ends and third place in the competition.

President Lois announced the results at an informal gathering in the club rooms after the competition.  A great day for all who took part.
Posted by Robin Copland at 22:46 No comments:

So anyhow, after Bob Barr's historic Granny win over Brian Fleming, I decided to do a quick Google search on "Granny pictures".

Ahem.  All I'm saying on that one. 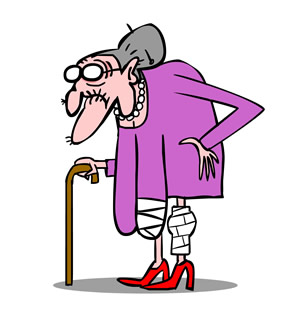 I was on the next sheet playing in a critical match (which, despite Dave Munro's magnificent victory, still keeps him rooted to the bottom of the league) so had a close and personal view of Bob Barr marshalling the forces of daughter Kerry Clark (she's changed her name, but am I fooled - who are you trying to kid?), Anne Anderson and guest substitute, the magnificently-trousered Stuart Dodds.  They kept piling on the pressure making Brian's last stones more and more difficult the further into the game they got.  Funny thing is that Brian was one of the three contenders going into the game.  In the great search for birds that could be verbs, the shag springs to mind - though team Fleming could still come second, as we shall see later.

In the KesleyWoodless team, Betty Gibb skipped an interesting game against Niall Gunn.  The Kesley team lost, but scored five ends.  They stay on ten points, but a massive seven ends ahead of John Steven who had an impressive five-end to two win over Jenny Barr.  Katie Wood needed to beat Dave Munro to keep herself in contention, but she didn't, so that was that.

Here's are the results


Right.  Now let's look at the league table and draw some conclusions


The winner of the trophy will be either John Steven or Susan Kesley, but here's the thing.  John is a full seven ends and 18 shots behind Susan so, in order for him to win, we are talking Brexit and Trump happening all in the one year.  Nae chance.  (Voices off).  "What - it already has...?"  Blooming heck - have I just woken up in an alternative universe or something? 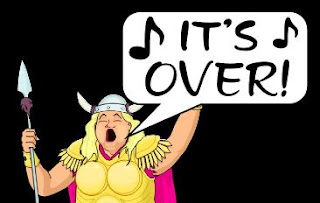 In the race for the Harlaw Cup, there are three teams in the running.  John Steven remains in pole position, but if he falters in his last game against Susan, he could be overhauled by Niall Gunn, who plays Jenny Barr, or by Brian Fleming, who plays Katie Wood.

I know you are all looking for a prediction, so here it is.  Susan Kesley wins the Kettle trophy and John Steven wins the Harlaw trophy.  There you go.
Posted by Robin Copland at 23:30 No comments:

Every so often, something happens in your life that will be a memory for ever.  I have a friend, for example, who acted as scorer for the World Championship final game in Glasgow in 1985.  "This is the nearest I will ever get to participating in the final of the World Championship," he said, "so I am going to make the most of it."  To this day, it is a cherished memory.

Gavin Barr had one such moment on the opening day of the European Championships in Glasgow when he was nominated as one of the two best junior sweepers in Scotland to sweep the ceremonial opening stone in front of a large audience of curling fans and all of the competing teams.  What a thrill for him!  The two sweepers guided and "encouraged" (i.e. kicked and pushed!) the stone towards the pot lid with lots of encouragement from all who were in the building.  A great team effort resulted in a successfully executed plan.  Would that it were that easy in a game!

I am indebted to Bob Kelly, chair of the event organising committee, Cameron MacAllister of the World Curling Federation and Richard Gray for facilitating permission to use the picture and to photographer Jeffrey Au for a fantastic picture of Gavin and Layla Al-saffar sweeping the ceremonial opening stone of the event.

To see a bigger image of the picture, just click on it. 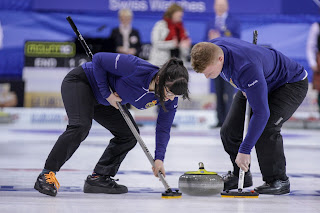 The event continues in Glasgow until the weekend.  If you have some spare time, why not go through for a game?  The Scottish Ladies are on a 6-0 record.  The men are not out of it yet (3-4).  Braehead Arena is well signposted when you get close to it; just follow the M8 through Glasgow, engage your nose and follow it!﻿
﻿
Posted by Robin Copland at 09:53 No comments:

A reminder to all that the annual pairs competition takes place on Sunday 27 November.  I realize that there may have been substitutions since the original draw was published, but you will know for whom you are subbing (if you are a sub), so it is still instructive to post the original draw.  Here is it.


Typically, you will have two short games to play so, if you are playing at 1.45pm, you will play a game, then repair to the bar for refreshments before taking to the ice for a second game at the conclusion of the 2.30pm draw.

It's all great fun - if only because it is different!

There are eight teams out this Friday at 5.30pm and the Kettle competition is approaching its climax.  It could all be over after Friday's game - or it could still be up in the air; be there, or be square!
Posted by Robin Copland at 11:31 No comments: