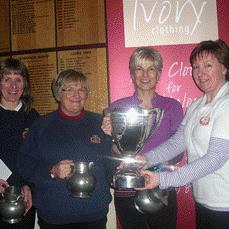 Five C and B curlers played all last week in the Henderson Bishop playdowns at Murrayfield; the ultimate prize - a trip to the south-west of Scotland to compete in the finals at Stranraer ice rink.

In the first round on Tuesday, Susan Kesley, Fran Stretton, Jenny Barr and Morna Aitken had a tight game against Jean Lennie's Penicuik side.  The next day, Margaret Nicol came in at lead and Jenny and Morna moved up the rink to replace the absent Fran for a tough game against Carrington.  Again - a nice win which set up a semi-final game against Susan Meikle's Ford Ladies team, with the same team as on Wednesday.  This, to an extent, was the big one as the top two teams were always going through to the finals.  Again - a nice win and the weekend in Stranraer was in the bag.

Now, for the silverware!

Susan had to bow out at this stage, as she was on coaching duty in Perth, so Jenny moved up to skip the rink and Fran came in at third.  Morna played second and Margaret lead.  The final was a nip and tuck affair against world senior silver medallist Jean Hammond and her rink which ended up with Jenny having to throw her last stone to win the game.  Throw it successfully, she did, so the five of them are off on their travels!

Immediately after the winning stone was thrown, there was a power cut, which threw both the rink and bar into stygian gloom - none of which took anything away from the C and B celebrations of a difficult job well done!