If there were nerves in the Gunn team, they were not showing tonight - even with Kerry Barr missing the last and critical league game (mind you, Colin Campbell is not a bad substitute!), there was a steely determination on show and all four players played well.  They were 4-0 up after three ends, which took them past their first target - to equal Andrew Cargill's total number of ends.  Even if they lost the game from there on, they were assured of at least second place in the league.

Twos were swapped in ends four and five before the team ran out deserved 8-3 winners. 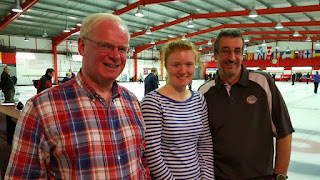 
The final games are shown in the completed results grid below.

Meanwhile on the adjoining sheet, Brian Fleming's team with perennial sub Josh Kellock playing instead of Betty Gibb, played out a great final game against Katie Wood, eventually overhauling Andrew Cargill's team by one point - enough to secure the Harlaw Cup for the runners-up in the first half league.
Here is the final league table.
All in all, this was a great competition with three teams right in it until almost the last stone of Brian's game against Katie.
After the New Year break, the first round of the Lymphoy Cup will be on Friday 8 January, when all eight teams will be out on the ice.  Here's hoping that the Lymphoy is as good a competition as this year's Kettle has been.
A Merry Christmas and a Guid New Year to all club members!﻿
Posted by Robin Copland at 22:33