There were a number of members competing in this weekend's Edinburgh International Senior Curling Championships.

Brian Fleming, John Steven and Dave Munro, who were playing with Robin Aitken, can consider themselves a tad unlucky not to have qualified for the quarter-finals. Robin Copland and Andrew Galloway also took part but failed to trouble the scorers!  Niall Gunn, playing second in the Mike Dick team advanced the furthest in the competition.  They just lost out in a quality and tight semi-final against the eventual competition winners, the Robin Gray team.

In the ladies competition, Susan Kesley, Fran Stretton, Katie Wood and Morna Aitken, playing with Vicky Gumley had a mixed weekend, losing a couple of games, including their game against Maggie Barry's team before coming through with a good final win against previous competition winners, Mary Barr. 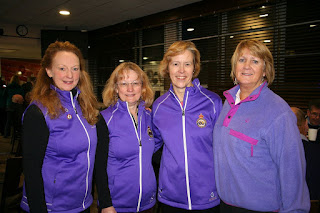 (from left) Maggie Barry, Ruth Addinall, Avril Anderson and Betty Gibb
In Jackie Lockhart's winning team is none other than Isobel Hannen.  Isobel is a substitute with Currie and Balerno, so we will claim immediate credit for a great win!  Congratulations Isobel, playing with Jackie, Christine Cannon and Margaret Richardson. 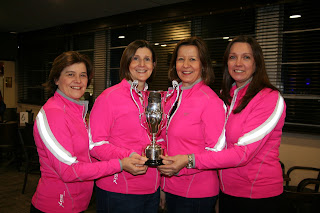