Currie and Balerno curlers are building a remarkable record in the Henderson Bishop competition, arguably second in importance only to the Scottish Ladies Championship.  They have regularly won the Murrayfield qualifying competition - indeed more often than not in recent years, C&B 1 has faced off against C&B 2 in the final of the Edinburgh playdown.  In the finals, both teams have regularly found themselves playing deep into the play-off rounds, whether playing for the Cherrystone trophy in the low road or for the Henderson Bishop  trophy itself.

This season, hopes ran high at the start of the competition; C&B 1, playing as Murrayfield 1 was defending the trophy.  Our two teams found themselves in the same section - the luck of the draw - and on this occasion, Kerry Barr skipped Murrayfield 2 to a big win over their club mates.  Murrrayfield 2 went on to win the section and Murrayfield 1 were runners-up and progressed to the low road, playing for the Cherrystone trophy.

Susan Kesley, Jenny Barr, Fran Stretton and Morna Aitken lost their semi-final game to Stirling and their competition was at an end.  Meanwhile, Kerry Barr, Annie Barr/ Katie Wood, Maggie Barry and Margaret Nicol were progressing through to the final by beating a strong Stranraer team.  Just to explain, Annie and Katie between them were filling the shoes of Betty "Cruiser" Gibb - as I write posting pictures from the Great Wall of China!  Their opponents in the final were Ayr, skipped by Olympic Gold Medalist, Margaret Agnew.  It was a tough game and eventually proved one game too far for the gallant Murrayfield 2 rink, but they can be very proud of their Silver Medals. 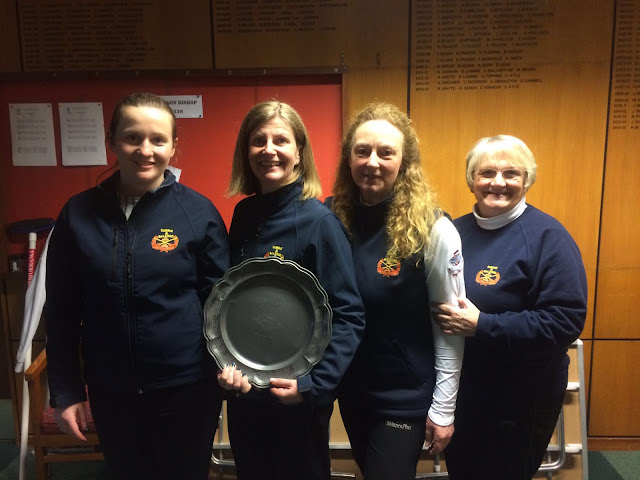 Runners-up Henderson Bishop Competition
from left: skip Kerry Barr, third Katie Wood, second Maggie Barry and lead Margaret Nicol
Astonishingly, the club's record in the Henderson Bishop reads as follows: Runners up Cherrystone (low road) in 2013 and winners in 2014; winner of the Henderson Bishop in 2015 and runners-up in 2016.  What a performance by our lady members!﻿
Posted by Robin Copland at 23:17