Maggie Barry on tour in Canada

Maggie is recently returned from her curling tour of Canada.  I asked her for a wee report for the website and she has come up just that.  I will let Maggie tell her story in her own words...

What can I say about our Scottish Ladies 2015 tour to Canada - the experience of a lifetime; a cliché I know, but oh-so-true!  From start to finish, a journey with friends, making new friends along the way; it has been a trip second to none. 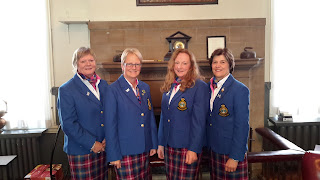 Maggie and her team mates at the Royal Montreal Curling Club, the oldest sporting club in North America.
Where else would we have been so warmly welcomed every day - almost like pop stars, with open arms and arches of brooms; escorted onto the ice with great ceremony, always accompanied by a piper, along with the mayor and other local dignitaries.  Once, there was even a town crier in his full regalia! 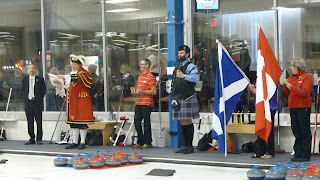 Town Crier welcomes the Scottish Ladies tour to the Royal Kingston Curling Club
Then there was the food!  Safe to say that we are all a few pounds heavier and only just squeezing into our tour skirts.  We were treated to local dishes such as tortiere pie in Quebec and Beaver's tail in Ontario (still not sure what that was - some kind of pudding) and, best of all, a fresh whitefish fry (from Lake Huron) served by the menfolk - a common practice in the country rinks and one that could be imported to Scotland, methinks! 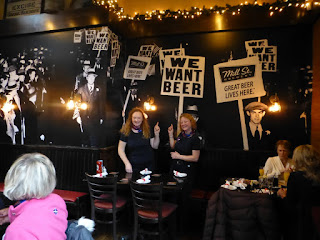 Maggie and team mates in a pub!

The generosity of the clubs and home billets knew no bounds, from handmade gifts like blown glass curling stones, stained glass, signed curling scene prints and even a pillowcase on which to lay our tired heads at night and take home in the morning!  Attention to detail extended to the table settings, programmes, flags and even welcome signs in the towns.  Staggering!

We also had a very balanced itinerary which allowed time for sightseeing.  Stand out attractions included our two-nights stay in the charming Chateau Frontenac, giving us time to explore Quebec city, or the equally amazing, but quite different Chateau Montebello, constructed from cedar logs - magical.  Niagara Falls, visits to wineries, a "race" round the Montreal Formula 1 track with our amazing bus driver Jacques, or "Jock" as he became affectionately known.

I have to mention the privilege of having Brad Jacobs throw the first stone at the "Soo"; of playing at Rachel Homan's home club, Ottawa and actually playing Julie Hastings and Marylin Bodough - both of whom we defeated, but not with their full rinks, I have to admit! 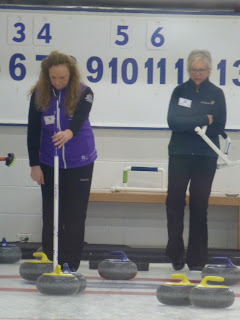 The whole trip flowed seamlessly thanks to the incredible preparation and organisation of Fran Todd, our brilliant courier and, of course, of Margaret Richardson, our tour captain and in whose team I was proud to play.

We not only enjoyed ourselves immensely along the way but also were able to raise some money for Alzheimer Scotland as well as the Sandra Schmirler Foundation.  We raised CAN$4500, partly through a fun "court" held most evenings by Helen and her "she-devils".  We played a game of "bunnets and kilts" in each venue most evenings and were fined for various misdemeanours!

Of course, the icing on the cake was to bring home the Muriel Fage trophy 150 shots to the good - yay!

Fran worked out some final tour statistics for us all to think about
2043 kilometres travelled
23 rinks visited
1008 ends of curling played
368 stones thrown per curler
8832 stones thrown in total
170 tone of granite shifted
2182 kilometres of sweeping
2/3 the length of Loch Ness travelled by the leads and seconds!
Final Score: Canada 762.  Scotland 912.

Many thanks indeed to Maggie for such a full and interesting report on - and pictures of what looks to have been a great tour!