Rowena Steven and Melissa McCluskey got oh-so-close to a fabulous pairs win on Sunday!  To be very fair, their cause was not harmed by the fact that they came up against the writer in their first game.  Poor Karen Munro - all I'm saying.  When the last draw fetched up against the hack at what most people would have thought was a fairly firm strike weight, she knew her goose was cooked, but Rowena and Melissa - well they were right in the hunt with three ends won out of four.  This set up a a tough game against Kerry Barr.  They did really well and though they lost a four in the last end, that mattered not a jot; they had secured a further two ends to take their total to five.

Katie Wood also won five ends but was behind on shots, so lay second in her group.

So, onto the second session, the players in whom have the advantage of knowing exactly what to do to get ahead of the winners of the other group, not that such details have made the slightest difference in the past.  Why, I remember when one winning team was blissfully and completely unaware of where they lay, what they had to do and indeed of the very fact that they had won!

So Joe Barry and guest John Good found themselves up against Lois Copland and Nook Weir who earlier had had a really tight tussle with Jenny Barr and recently returned Canadian tourist, Maggie Barry.  Four ends later, they had not added to their total and Joe and John had won four ends to add their two in the first game.  That took them to six ends and the competition! 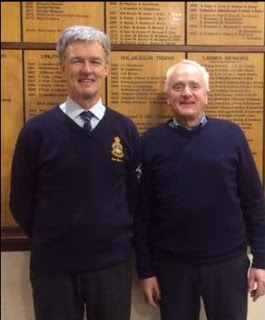 Andrew Galloway and Morna Aitken got all excited when president Margaret Nicol announced that they done enough to come second with their five ends, but in a move of which the great South African referee Andre Joubert would have been proud, indeed should learn from, a mistake was noticed and corrected.  Turns out that Rowena and Melissa were the runners-up.