More weekend success to report - this time from Kinross when two teams with C&B members made it all the way through to their respective finals!  Brilliant performances from Teams Whyte (Gavin Barr) and Davie (Kirsty Barr and Emma Barr).  These two teams are going great guns at the moment and when you add in team Karina Aitken, who reached but lost the 3v4 play-off, after her victory at the Greenacres U21 competition, our juniors are doing the club proud.

Regular readers will know that Team Whyte, pictured below (thank you to Tom Brydone, who took the picture and has kindly let us use it on the website) were coming off a great win at the Greenacres U21 competition.  They were involved this weekend in a titanic 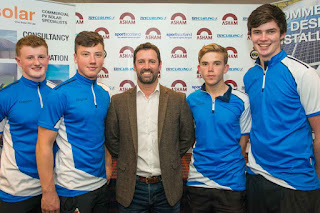 From left: Gavin Barr, Euan Kyle, Ross Whyte and David Baird
struggle against their rivals, Team Bryce.  Seemingly in control of the match in the early stages, there was a little bit of confusion when the bell went during the seventh end.  The umpire confirmed that the final was to be played over eight ends, after which the score was peeled and Team Whyte took the hammer down the extra.  Ross's last-stone hit and stay rolled agonisingly outside the Bryce counter and that was that.  Not a bad start to the season though for the boys - winners and runners-up in the two competitions played to date.  All looking very impressive.
Meanwhile in the ladies competition, the U17 team Davie impressed everyone by making it all the way through to the final of this big and prestigious junior competition.  Again thanks to Tom Brydone for letting us use his picture of the girls after their final. 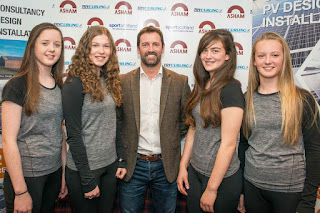 From left: Emma Barr, Anna Skuse, Lisa Davie and Kirsty Barr
A big three-end score in the second end calmed any nerves on Team Murray's side and though Team Davie kept on fighting their more experienced opponents eventually ran out 8-2 winners.
For a somewhat less biased report (!), you can read Barbara McFarlane's comments on the RCCC website here and for some great action pictures of the event, go to Tom Brydone's album here.﻿
Posted by Robin Copland at 15:42