Gina Aitken and her team of Naomi Brown, Rowena Kerr and Rachel Hannen have qualified for the 1 v 2 page play-off game at the World Junior Curling Championships in Tallin after a great win over England in their concluding round-robin game. 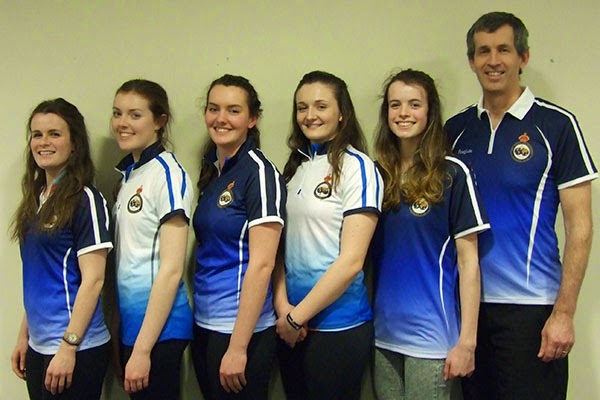 The girls finished their round-robin campaign in joint second place, tied with Sweden on 6 wins and three defeats.  they qualify in second place on account of their victory against the Swedes earlier in the week.

You can read a full story on the Royal Club website here. 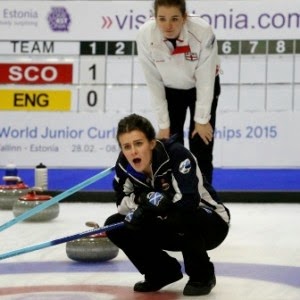 Gina in action this morning against the 'Auld Enemy'!﻿
Photograph by Richard Gray/ World Curling Federation

They have a tough game in the 1 v 2 play-off against Canada's so far undefeated team skipped by the reigning World Junior Ladies Champion, Kelsey Rocque.  That game is at 14.00 local time, so 12.00 UK time tomorrow (Saturday).  The winner progresses to the final and is guaranteed at least a Silver Medal.  The loser plays the winner of the 3 v 4 page play-off game and the winner of that game goes forward to the final.  The loser, astonishingly, drops down to a Bronze Medal game.

Why astonishingly?  Well, if you lose the 3 v 4 page play-off game, that should be curtains, in the humble opinion of your correspondent but the WCF, in their wisdom, want the Bronze Medal to be "won".  Well, that's OK until I give you, m'lud, the Silver Medal winner, who has just lost the final.  Rubbish!

All this means that Gina and her team are only guaranteed fourth place at the moment; interestingly, so are Canada!

In any case, good luck to Gina and her team mates as well as fifth player Karina Aitken and coach (and former World Junior Champion himself, of course!) David Aitken.