First, some background.  You can read Bob Cowan's article on Andrew Henderson Bishop here.  In the article, Bob writes, the trophy he presented and which bears his name is played for as the premier ladies' event in Scotland each season, aside from the Scottish Championship.  So, the Henderson Bishop is no ordinary curling championship; no run of the mill competition.  Club members should be very proud of the achievement of Jenny Barr, Susan Kesley, Fran Stretton and Morna Aitken who, as Murrayfield 1, won the competition last week.  Interestingly, and as a wee aside, the last time Murrayfield won the competition, none other than our own Shona Watt was in the winning team skipped by her mother, Barbara.

Here is a photo of the winning rink. 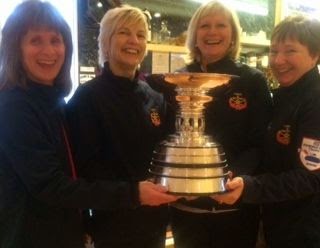 Monday started with Lockerbie, past winners and one of last season's semi-finalists.  We knew this would be a tough game and it was, ending in a peel.  Murrayfield 2 faced last season's winners and sadly lost their game.  Super sub Annie Barr joined Murrayfield 2 in place of Maggie Barry who was unfortunately still unwell.  On Monday evening, we were treated to a civic reception by the Scottish Borders Council and then all eight of us went for a quick bite to eat.  One or two wines may have been consumed!

Tuesday morning saw Murrayfield 1 play Murrayfield 2.  This was a very close game, with Murrayfield 1 having to draw the four foot to win the game.  Murrayfield 2 then had their bye and got busy with their evening headwear for the race night in the ice rink.  Murrayfield 1 played Waterfront.  We knew that we were in a tough section where ends would likely come into play.  We finished up with seven of the eight ends played and were pleased with the result.  Lockerbie meanwhile were drawing with Dumfries.

Tuesday evening was spent in the ice rink at a carvery supper and short race night.  Well done to Margaret and Betty for their "Blue Peter" skills with our hats!  Annie Barr returned home and past-president Katie Wood arrived to replace Maggie on day three.  A great evening was had and again, one or two wines may have been consumed.

Wednesday morning saw Murrayfield 1 with their bye and what should have been a long lie - not so in the noisiest hotel in the world!  Murrayfield 2 played Lockerbie and had yet another peel.  Wednesday afternoon saw a re-run of last year's final with Murrayfield 1 playing Dumfries.  We knew that if we won one end then we would at least qualify for the low road; a win or peel would put us in the high road.  It was a very close game and the skip's first stone at the 8th end ensured that a peel was the best result that Dumfries could achieve; Murrayfield 1 was through to the high road semi-final.  Murrayfield 2 played Waterfront in a game that was very sociable!

Wednesday night is the most formal event of the week with blue blazers, top table and speeches.  At the dinner, the draws for the high road and low road semi-finals takes place - all very exciting.  It was a great evening with a lovely three course meal, some wine (again!) and lots of chat and laughter.  The draw was made and it pitted us against another previous winner, Ayr, skipped by former Scottish champion and Olympic Gold Medalist, Margaret Agnew (nee Morton).  It wasn't the semi-final we might have chosen for ourselves, but Maggie told us that she wasn't that keen to play us either!  We left the party at a sensible time, though apparently others were up partying until the wee small hours.

Thursday morning and what can we say!  Great play by the whole team saw the first end set up well and a last stone hit gave us a three.  We followed that with a stolen one.  Ayr's heads went down and we were able to keep stealing ends.  Their final stone at the seventh was short against three of our stones; we stole a three and they shook hands.  We were into the final!

All of the other semi-finals - both in the high and low roads - were really close games.  In the other high road semi-final, Borders 2 came through, so they were our opponents in the final.

In the final, we played well in the first few ends and found ourselves five-one up playing the seventh end.  The Borders 2 skip played a fantastic shot with her last stone in the seventh end to score a three; the noise from the packed bar and café was incredible - we all thought the viewing windows were going to land on the ice with all the banging and cheering.  We were one up with last stone playing the last end; we all kept calm and played our stones well.  Our first skip's stone ensured at least an extra end for us and our second hit gave us the title.  We were absolutely delighted!

All in all, it was a great week with fabulous hospitality from Borders Ice Rink.  Everyone there enjoyed themselves both on and off the ice.