Repeat C & B Win in the Midlothian Province Bonspiel

Another sterling performance from the three C & B rinks on Monday last ensured a repeat victory in the Midlothian Province Bonspiel.  This was a closely-fought battle again and John's report below brilliantly captures the atmosphere as the team moved from, "oh we have won at a canter" to the realisation that Stewart Melvilles FPs were coming up fast on the rails, all reported to John by Niall Gunn who had come into the rink to see how things were going.  A great team effort! 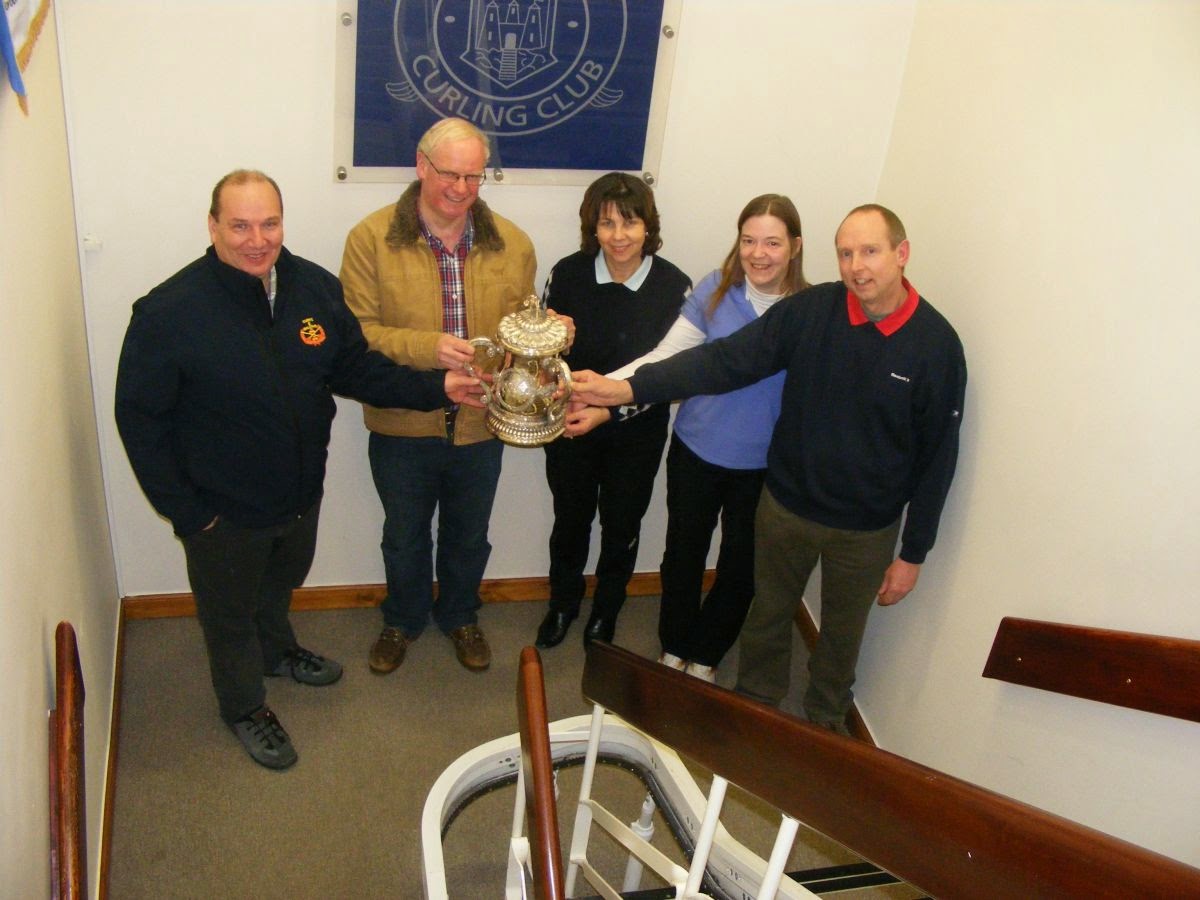 "Arriving at the curling rink, I already knew about the great win at high noon by Niall Gunn, Mike Wood, Andrew Cargill and Donald Kennedy.  They had beaten Edinburgh Ladies 15-2.  I looked at the board and saw that Susan Kesley, Katie Wood, Dave Munro and Betty Gibb had followed that up with an 11-2 win over Oxenfoord.  That meant that we had an overall score of +22 going into the last draw and that our "average" score was +11 after two games.  The nearest club to us at this stage was Merchiston at an average score of +7.

So, apart from keeping an eye on the scores in our session (Chartered Surveyors were at +5), it seemed like all the hard work had been done in the first two games and as long as I, Lois Copland, Shona Watt and Andrew Galloway kept things tight and didn't lose, we would be alright.  Niall had come in to watch our game and he confirmed my initial assessment.  We had a tight game against a wily skip, John O'Neil, but then we took threes at the fifth and seventh ends (losing a one at the sixth), so we moved to 8-3 up and Niall thought that the "cup was in the bag!"

But we hadn't considered Stewarts Melville FP!  Andrew G looked across at their game and noticed that they were 14-1 up already with three well-guarded shots in the house in the eighth end of their game.  Niall went over to watch their game and confirmed back to us that they had won 17-1.  He quickly worked out that we had to win by three shots.

So back to our game.  We had a shot biting the four-foot and it was pretty well guarded; John had two other stones in the house.  I considered it too risky to hit with my first stone, so we called for a draw to the other side of the house; it came up slightly short but was semi-guarded and lying in the eight-foot.  Step forward John O'Neil, who took a double with his first stone!  Suddenly, I am facing three opposition stones with my last stone to come.  Some more frantic calculations and the message came through from Niall that we could not afford to lose any more than a two.  Decision made: go for the hit!  I can tell you that I was mighty relieved to see two opposition stones leave the house.  John drew safely for his two and the final score was 8-5, but more importantly, we had secured the win by enough shots to keep the cup in the club - a tremendous achievement for all twelve players and for the club.

That's the beauty of bonspiel curling; it's never over until the last stone is thrown and the situation can change in a flash.

I have to thank Shona, Lois and Andrew for sweeping nearly every stone in the game and I know that Lois and Shona must have swept every one of my stones."

* We are going to try to get a picture with all the players involved at some stage so that we have a proper photographic record of this great club achievement.  Mind you, getting all 12 together?  It will be like herding cats!