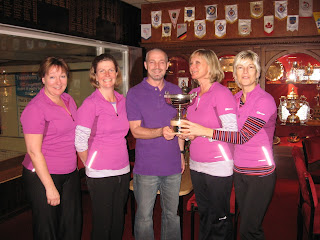 Four bright young things - also members of Currie and Balerno - travelled down to deepest, darkest Ayrshire, where it is very wet and the natives speak with an altogether funny accent, there to compete in the rink's premier ladies competition, the Sadie Anderson.

Jenny, who looks bemused in the picture - probably because she realises that she is about to be lynched by a hatchet mob for winning the competition and NOT coming from deepest, darkest Ayrshire, takes up the story.

The Sadie Anderson was run as a schenkel over four confirmed games, with no knock-out semis or final.  We won our first three games so were in the 1 v 2 game which was actually peeled against Margaret Agnew (nee Morton).  We were the only undefeated team, so it was enough for us to secure the win.

For those who do not know Maggie Morton, she played third to Rhona Martin the year that Rhona won the Scottish and was instrumental in securing Rhona the GB berth at the Salt Lake City Olympic Games.  She was fifth player in the squad that brought back the gold medal, so beating her was quite a coup for our intrepid quartet!